Editors note: This isn’t just another article trying to “debunk organic foods”. This is an examination of the corruption involved in the food industry as a whole, and why it should be a central concern of anyone who cares about clean food.
Strap in, because you’re about to relearn everything you knew about the organic food industry.

Costa Rican farmer Jose “Pepe” Castro Otarola is certified to grow organic pineapples under the U.S. Department of Agriculture seal. Castro says that managers of a fruit processing company exaggerated quantities they bought from him to make their U.S.-bound shipments appear organic, an accusation the processor denies.

Pital, Costa Rica—Plenty of people knew that the numbers didn’t add up in pineapple fields here that stretch like green carpets beneath brooding volcanoes.

They knew it in Washington, D.C., where the head of the U.S. Department of Agriculture’s National Organic Program saw Costa Rica was shipping more organic pineapples than it was certified to grow.

They knew it in Pital, hub of the world’s biggest pineapple exporter.

In Pital, neighboring organic farmers felt vindicated. They believed they had further examples of how the pineapple company had gamed the USDA. U.S. importers, hurt by competition they considered unfair, expected strong action by regulators.

But they got nothing of the kind. Instead, a NerdWallet investigation found, the USDA punted — kicking a gaping hole in the credibility of its organics seal.

Not only did the USDA allow farming company Valle Verde to choose and pay Primus for organic certification—a conflict of interest enabled by federal rules—but the agency trusted the accused certifier to declare the grower innocent.

“It’s a horrible story,” said Alexis Baden-Mayer, political director of the Organic Consumers Association. “This information was handed to the National Organic Program on a silver platter, and they still don’t take the enforcement actions that are permitted under the law.”

If the USDA won’t act when presented with stark evidence of fraud, critics ask, how can consumers rely on the agency to police any of the annual $43 billion in U.S. organically certified food?

The answer is that the system can’t be trusted, NerdWallet found.

The National Organic Program, a USDA division with a $9 million budget, sets standards for labeling and accredits the agency’s 80 certifiers worldwide. Many certifiers have solid records. Growers, processors and handlers they approve sell legitimately organic food under the USDA seal.

But the system is ripe for abuse. 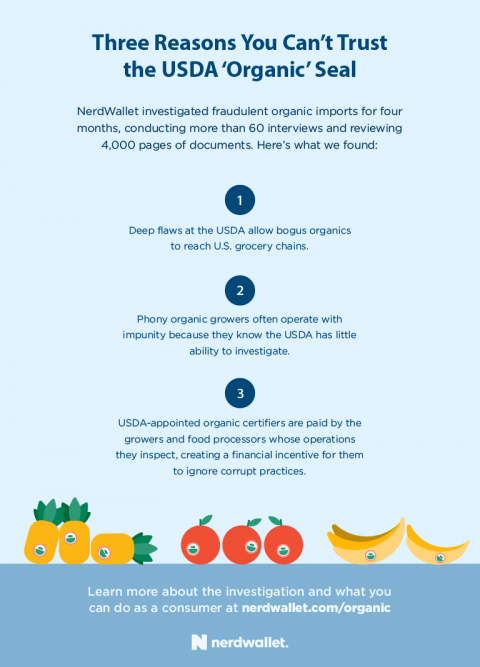 The USDA allows growers and processors to choose their own certifiers from its accredited list. The certifiers then get paid by those producers, even getting percentage of sales, a financial incentive that creates a conflict of interest.